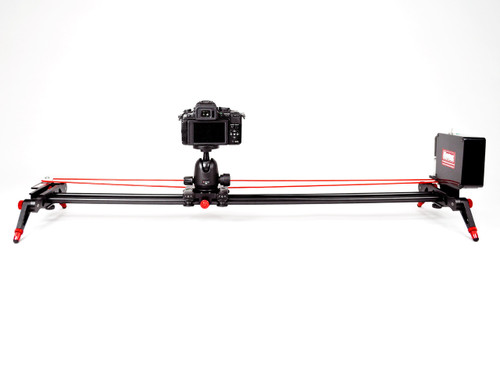 The Hague Powerslider 2 coverts your Camslide camera slider to a motorised system. The variable speed controller provides much better control and allows you to create much smoother, and more consistent, shots than you can by hand.

The new Hague Powerslider 2 has been specifically designed for the new range of Hague Camslide systems and is compatible with the S600, S800, Edge and Drive models.

The variable speed controller allows for easy control and enables the slider to go from a still position to the required speed with smooth movement by turning the control knob. It can be used for both smooth tracking shots and simple time lapses.

The Powerslider has been redesigned and is now easier than ever to attach. It simply screws to the end supports at each end and the cable then attaches to the carriage by a small clamp, this makes it much simpler to set up a shot, as you can move the carriage back and forth by hand before engaging the drive onto the carriage. It is now powered by standard AA batteries which removes the need for mains power supply.

The Hague Powerslider can operate at 6v, using 4 batteries, or at 12v using 8 batteries. At its slowest speed it will slide approximately 12mm in 30 seconds, yet at its highest speed it will cover around 570mm. This wide range of speed control ensures it is suitable for many speeds of tracking shots but it can also be used for simple time lapses too.

The batteries (not supplied) are stored within the control box and can be easily swapped. The drive belt supplied is suitable for the 800mm rail systems and can be shortened for the 600mm rail.

Please note the motor drive is not silent and the on board camera microphone is likely to pick up some noise, especially at the faster speeds.

Price includes the Hague HPS2 Powerslider, it does not include a camera slider, the camera, a video head, ball head or any other accessories pictured.