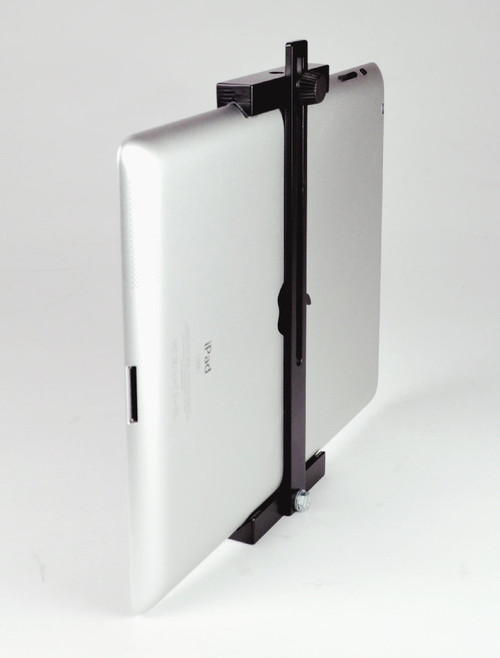 The Hague Universal Pro Tablet Mount has been designed to hold most types of modern, slim tablets including the new iPad Pro. It enables the tablet to be mounted to a tripod or any other mount that uses the standard 1/4" camera screw.

With these tablets, such as the Apple iPad, having such good cameras in them, with the facility of being able to record good quality video, it makes sense to be able to mount them to a tripod or other mount to hold the tablet steady.

The mount has two V shaped sections that hold the tablet in a horizontal position. The mounts height is adjustable from 60mm (2 3/8") to 228mm (9") and accepts most modern slim tablets that are rounded on their edges. If the tablet has square edges, the width must not exceed 12mm.

The Hague Universal Pro Tablet Mount is not plastic, it's made of machined aluminium with a thumb screw for adjustment.

Suitable for most modern slim tablets such as the iPad or similar, plus large phones such as Samsung Galaxy Note or HTC One X.

Price does not include any of the other accessories shown.