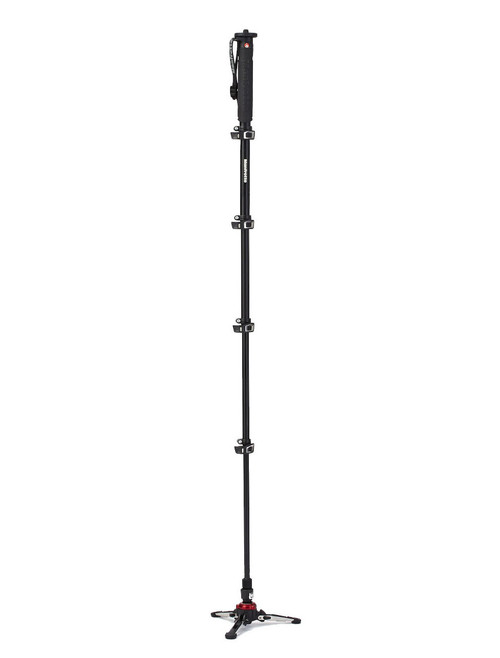 The Manfrotto MVMXPROA5 fluid video monopod with fluidtech base is a 5 section aluminium monopod which forms part of the Manfrotto XPRO range. It is a compact system designed for people on the move and will support camera set-ups that weigh up to 6kg.

The Manfrotto MVMXPROA5 is the most compact version of the aluminium video monopod within the range measuring just 52.5cm at its retracted height yet expanding to 153cm when extended. It incorporates the full Manfrotto fluid base (MVMXPROBASE) system with the latest FLUIDTECH technology. Manfrotto’s FLUIDTECH video base enables the ultimate shooting smoothness on pan, tilt and swivel for an expanded range of perspectives. The three retractable feet make it extremely portable when folded and allow the monopod to be easily carried everywhere.

Manfrotto have added the new D-shaped aluminium tube legs to this system and these greatly improve anti-rotation resistance throughout the monopod, following the videographer’s rapid rotation movements. Combined with the Quick Power Locks (QPL), which strongly lock the lever onto the monopod tube’s flat side, this helps to eliminate unwanted jerky movements.

On top of the monopod is the dual 1/4" - 3/8" screw which allows you to mount the camera directly to the monopod or via a ball head, tilt head or video head.